The Masonic history of this Province is of course set within the wider development of Freemasonry in this country over the centuries. Students of Masonic history will be aware of the formation of Grand Lodges in the 18th Century and of the split between the ‘Ancients’ and the ‘Moderns.’

The first Grand Lodge, the Grand Lodge of England (GLE), was founded on 24 June 1717 and, because of the way they varied or modernised their ceremonies, members were known as the Moderns.

In 1753 the Grand Lodge of the Ancients was formed. This consisted of those who adhered to the traditional or ancient ceremonies and practices. Because the 3rd and 4th Dukes of Athol presided over them members were known as Athol Masons.

After difficult and protracted negotiations ‘Articles of Union’ unifying the two Grand Lodges were adopted on 27 December 1813. The United Grand Lodge of England (UGLE) was thereby formed. This remains the governing body of regular Freemasonry today.

A room in Canon's Ashby House near Daventry is believed to have been used as a Masonic Lodge Room around 1580-90. This is evidenced by symbols and paintings found in the room and other Masonic symbolism throughout the house.

In August 2010 WBro Kevin Corcoran of Eleanor Cross Lodge No 1764 conducted research to try and establish whether there is any provable basis for this connection but due to lack of evidence his findings are inconclusive (click here for a copy of the full research report).

An endorsement on its Constitution, dated 18 January 1806, declared that it had removed to the ‘Ship Tavern’ in the Borough of Boston, in the County of Lincoln. The same Lodge of Harmony (now) No 272 still meets in Boston, Lincolnshire. Its Brethrens’ application in 1906 for a Centenary Warrant failed because they were unable to show any record of working before 1806. The Lodge minutes for the short period it was held in Northampton were non existent.

WBro Clegg belonged to the Lodge. Most Masons will perhaps not be familiar with his name. They will, however, be familiar with “Hail Eternal by Whose Aid” and “Now the Evening Shadows Falling” both of which he wrote.

In 1798, the Province of Northamptonshire under the Earl of Pomfret as its first Provincial Grand Master was granted a Patent from the UGLE. As that Patent was being issued, the country celebrated Rear Admiral Nelson’s victory over the French Fleet at the Battle of the Nile in Aboukir Bay. 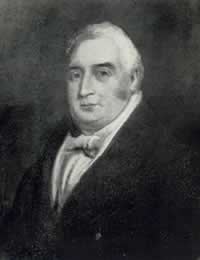 Local Masonry During the Napoleonic Wars

During the Napoleonic Wars (1793 to 1814) there were up to 122,000 enemy soldiers and sailors held in captivity in Prisoner of War camps around the UK. Most of them were held in rotten hulks on rivers as well as in City Goals.

Many Masonic Lodges were formed by these prisoners. One such Lodge named La Bonne Union was in Northampton. The existence of this Lodge is known because its Master in 1810 was an honorary member of a Lodge in Ashby-de-la-Zouch, Leicestershire, called Vrais Amis de L'Odre. His name, as Master, appears on the two certificates of Bro Louis Jean described under the heading of the Lodge. Sadly no records have yet been found in Peterborough but it is known that many other Lodges existed throughout the British Isles.

The first recorded Lodge in Huntingdonshire was Lodge No 160B. In 1802, it moved from Norwich to meet at the Angel Inn, Narrow Street, Peterborough. It had been originally warranted by the Grand Lodge of the Ancients on 3 September 1787 as Lodge No 160 meeting at the Golden Anchor, Norwich. In 1812 it moved from Peterborough to Pontypool as the Hiram Lodge. It was erased in 1830

Bro John Taylor Allison of the 2nd Battalion Northamptonshire Militia was a member of the Lodge of Perseverance No 213 which was originally warranted by the Grand Lodge of England (Moderns) and, to this day, meets in Norwich. He was a petitioner for Pomfret Lodge No 360 and its Secretary from 12 June 1821 to 19 September 1822.

It was warranted on 16 October 1819 and met in Northampton at the Fountain (later renamed the Criterion). Its eleven founders were drawn from the different Constitutions that existed before the formation of the United Grand Lodge of England (UGLE) in 1813. They had such widely differing views on procedure and the Lodge had little chance of survival. Helped by the newly formed UGLE they reached a measure of agreement, loosing two founders in the process. Attendances were small and it took many years for the Lodge to recover from these early setbacks. In 1836 there were only 13 members and they did not all attend regularly.

Freemasonry in Towcester began in 1837 with the formation of the Lodge of Fidelity which originally met at various public houses in Towcester including the Talbot, Saracens Head and Pomfret Arms.

In Kettering Freemasonry dates back to 1839 when the first meeting was held in the White Hart Inn (now the Royal Hotel).

First 100 Years of the Combined Province

The Lodges existing at the time of this combination were

By 1840 the membership of Pomfret Lodge No 360 had increased to 61 but bad feeling still existed and the Lodge of Merit No 466 was formed in that year. A few years later it moved to Oundle and then to Stamford (where it still meets).

Although some members had misgivings about meetings taking place on licensed premises they continued to do so until 1875 when premises in Abington Street, Northampton were bought, rebuilt and converted into a Masonic Hall – all for £2,000.

Interest in Freemasonry then rapidly increased. Pomfret Lodge and its Royal Arch Chapter grew rapidly. In 1878 Eleanor Cross Lodge No 1764 was consecrated. The following year, Simon de St Liz Lodge of Mark Masons No 245 was formed. In 1881, De La Pre Lodge No 1911 was founded.

After only six years in their Abington Street Masonic Hall, Northampton brethren were finding it to be too small. They bought a site in Princes Street, Northampton for a new Masonic Hall. On 5 September 1889 a special Provincial Grand Lodge met at the Masonic Hall, Abington Street, Northampton for the purpose of laying the Foundation Stone of the new Masonic Hall. About 70 brethren heard the Provincial Secretary read the dispensation to wear Masonic clothing. They then adjourned to the garden of Beethoven House, Market Square, Northampton. From here, they paraded in procession to the Princes Street site where they were addressed by the RW Provincial Grand Master, the Earl of Euston, and others. 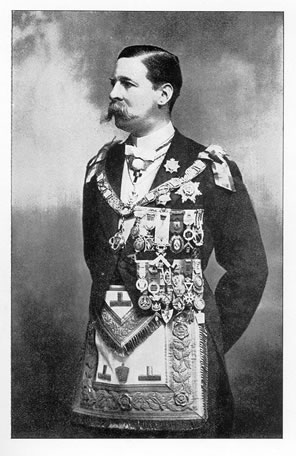 The Provincial Grand Master then laid the Foundation Stone (which was to be later re-laid in St George's Avenue and in Sheaf Close, Northamton). 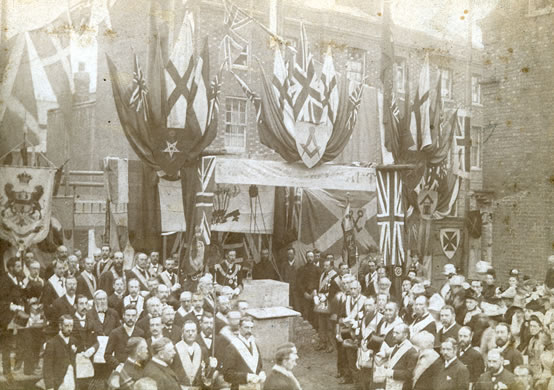 The trowel he used had Masonic connections through Pomfret Lodge

Each of these events had been prominently attended by members of Pomfret Lodge.

In 1890 the Princes Street Masonic Hall was opened and the Provincial Grand Lodge met there for the first time. At that time there were three Lodges in Northampton. 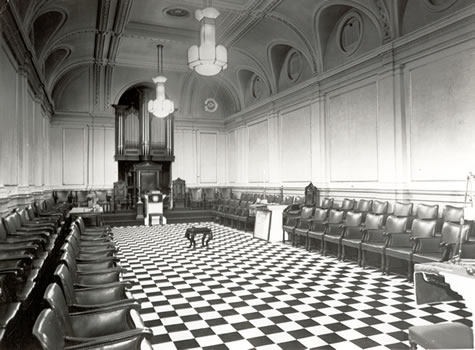 As the end of the 19th Century approached, more Lodges were consecrated:

By the outbreak of the First World War in 1914 a further six Lodges had been consecrated.Although Stamford is in the County of Lincolnshire, the 1913 Provincial Grand Lodge of the Province of Northamptonshire and Huntingdonshire was held there after a dispensation had been granted by the Provincial Grand Master of Lincolnshire, the Rt Hon Lord Yarborough. The need for such dispensation for future events was rendered unnecessary after a 1919 letter to our Provincial Grand Master, the Rt Hon Lord Lilford from Lord Yarborough. He stated that, henceforth, for Masonic purposes, the whole of the town of Stamford should be considered to be in our Province. This has remained so ever since.

During the Great War 119 Brethren of the Province (about 10% of the total membership) served King and Country. It was suggested at the Provincial Grand Lodge of 1915 that a Roll of Honour of those who laid down their lives be kept but this was not done.

Grand Lodge issued a Masonic prayer for use in time of war. Some Lodges in the Province issued a War Card with a prayer for Brethren on active service. This was printed in the languages of the five warring nations (English, French, German, Italian and Turkish).

Between the First and Second World Wars ten Lodges were consecrated.

Because of the emergency created by the Second World War many of the activities associated with Freemasonry were temporarily curtailed. These included restrictions on meeting days and times, suspension of the traditional Festive Board and the short notice cancellation of Lodge meetings.

The Later Half of the 20th Century

On 5 April In 1954 WBros Fredrick Snelson, Henry Ivens and William Roper signed a contract with Right Honourable Baron Fredrick Hesketh & Major Fermor Hesketh leasing the ground on which now stands the Towcester Masonic Hall. The lease was for 99 years and the cost ten shillings a year. (Lord Thomas Hesketh was PGM from 1936 to 1944. His grandson, Lord Alexander Hesketh, is still a member of the Lodge of Fidelity. ) 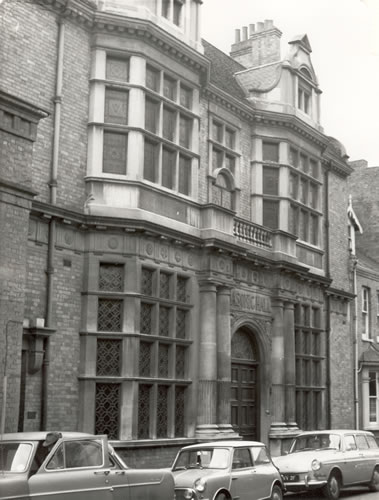 The Most Honourable the Marquess of Northampton DL was initiated into the Ceres Lodge No 6977 in this Province on the 8 December 1976, appointed Deputy Grand Director of Ceremonies in April 1983 and invested as Assistant Provincial Grand Master in May of the same year. In 2001, after 6 years as Assistant Grand Master, he was appointed Pro Grand Master, an appointment of which the Province is very proud.

The Province’s first Provincial Grand Master, George, 3rd Earl of Pomfret was the Great Great Grandfather of our 9th Provincial Grand Master, Thomas, Lord Hesketh who died in 1944. The family tradition was continued in the person of Thomas Alexander, Lord Hesketh, a member of the Lodge of Fidelity No 445 which meets at Towcester, Northamptonshire.

As the new Millennium dawned on 1 January 2000 there were 83 Lodges in the Province. An emerging theme has been the consecration of special interest Lodges:

In 2007, in a shrewd business move, Towcester Masonic Hall sold the Car Park next to the Hall. With the proceeds they bought additional land adjacent to the Masonic Hall. This land was used to extend and develop the Hall, doubling the Hall's size to cope with the future demands of Freemasonry in the expanding Towcester area. The North East Corner Stone laying ceremony took place on Friday, 27 April 2012, when the stone was laid by one of the most senior Towcester members, WBro Roy Humphrey, and the PGM, RWBro Max Bayes.

In 2012 the home of Northampton Masonry for 40 years (in St George's Avenue) was sold and the premises vacated on 31 May. From the beginning of the 2012/13 Masonic season the temporary meeting place for Northampton Lodges was the Westone Manor Hotel, Ashley Way, Weston Favell, Northampton.

In this short account we have attempted to give a flavour of the history of the Province of Northamptonshire and Huntingdonshire. At this point in our evolution history begins to overlap with news.

More recent happenings in the Province are regularly reported and available from various sources including Password, the Provincial magazine, and the News part of this web site.

We commend to you both these sources of information and the those used to research the historical information reproduced here.