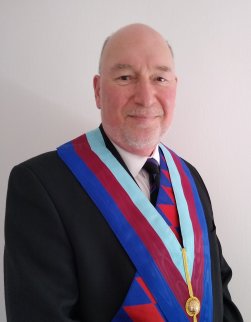 My Father was a member of Greenhill Lodge 5936 in Hertfordshire and I was duly Initiated in to Greenhill Lodge in 1984 (sadly after my Father has passed to the Grand Lodge above).  I progressed through the Offices and was installed as Worshipful Master in 1991.  I became Secretary upon installing my successor, an Office I continued to occupy for ten years.  I was appointed to the Provincial Ranks of PPGStB in1998, PPDepGReg in 2005 and PPGReg in 2012 - also the year when I resigned to concentrate my Masonry in the Province of Northamptonshire and Huntingdonshire, having moved to St. Neots in 1985.

Having moved to St Neots, I became a joining member of Euston Lodge 2283 in 1993, eventually going through the Offices and becoming WM in 2006.  I was honoured with the Provincial Rank of ProvJGD in 2012, and promoted to PPGReg in 2017 by RW Bro Max Bayes, our PGM.  I am currently Euston Lodge’s Chaplain and Preceptor.

I completed my journey in Pure Antient Freemasonry in 1993 when I was Exalted into Euston Chapter 2283. I progressed through the usual office and became MEZ in 2007.  Our previous MEGS, E Comp Wayne Williams, appointed me to Prov1stAGSoj in 2010, also the year I joined Chapter of Installed First Principles 3422.  In 2014 I was invited to become ProvGAlm, an Office I held until 2020.

I was further honoured in 2018 by appointment to the Supreme Grand Chapter Rank of PGStB.

2020 has seen our MEGS, E Comp. Jim Boughton, see fit to honour me with promotion to Third Provincial Grand Principal, giving me the opportunity to serve our wonderful Province even further.

I look forward to enjoying this next exciting phase of my Masonic journey.