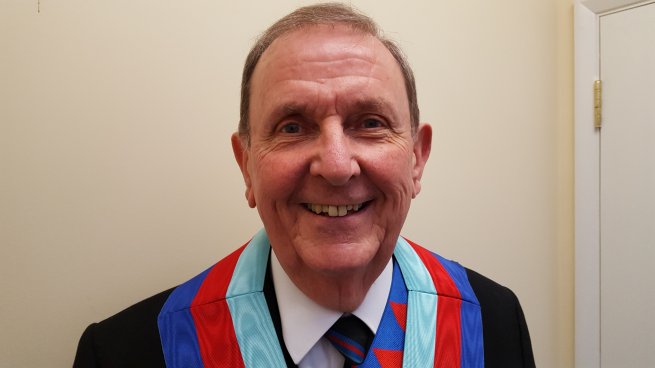 E Comp David was born on 19th October 1944. He had a distinguished career in Her Majesty’s Royal Navy, serving on submarines in communications roles. On leaving the Royal Navy, David joined the Foreign Office and was posted to Hanslope Park.

On moving to Northampton, he joined Lodge of St George 5978.

His talents were quickly noticed and he was rewarded with his first appointment as Active Provincial Assistant Grand Director of Ceremonies in 2010, an office he held for two years. This was followed immediately by his appointment to Provincial Assistant Grand Scribe Ezra (2012 – 2016) then Provincial Grand Scribe Ezra in 2016, serving in that office with distinction until 2019, when he was promoted once again, this time to 3rd Provincial Grand Principal, an office he filled with great enthusiasm and energy.

E Comp David was appointed to Grand Rank as Past Grand Standard Bearer in November 2017.

E Comp David was diagnosed with Motor Neurone Disease in spring of this year and retired from Active Office in June as the aggressiveness of his particular strain of MND became apparent.

As well as being well-known throughout this Province, E Comp David was a much-admired colleague of all our neighbouring Provinces. Their Provincial Scribes E too have been aware of his recent health issues and have sent their many best wishes and support - a measure of how much he was respected both within and beyond the boundaries of Northamptonshire and Huntingdonshire.

E Comp David passed quietly to the Grand Lodge above in the early hours of Sunday 19th July 2020. He is survived by his loving wife Margaret, an ex-WREN.

E Comp David and Margaret met when their service careers crossed in Singapore. Margaret has been a constant support and encouragement to E Comp David and his love, not only of Freemasonry, but also of golf, his garden, and of course, Northampton Saints. His daughter, Jacqueline and two grandsons, Adam and Daniel were very much part of David’s loving, family life too.

Details of E Comp David's funeral have been circulated to all companions within the Province.

If you haven't received this information, please contact your Scribe E, or failing that, the Provincial Office.