The Aldersgate itself is no more. It was rebuilt in 1617, to a design by the master carver Gerard Christmas, then damaged in the 1666 Great Fire but repaired. It stood ultimately until 1761, when it was removed to improve traffic access: Aldersgate Street is now the southernmost end of the A1. But the Aldersgate Working, Aldersgate Chapter of Improvement, and Aldersgate Chapter still stand strong. So not a physical gate but, even more masonic, a symbolic and moral Arch.

It was the first, socially-distanced, post-lockdown, Metropolitan Royal Arch meeting after the Coronavirus lockdown, one Saturday afternoon in early August in a hushed Freemasons' Hall saw the rescue of a mighty name. 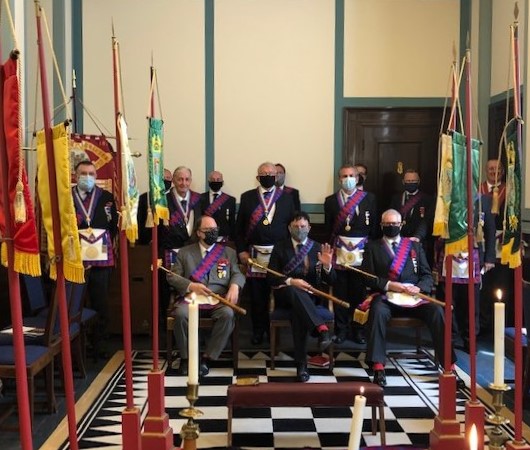 Aldersgate Chapter was founded in 1883, and named for the Aldersgate, one of the northern gates in the great London Wall once encircling the City, first erected by the Romans around the year 200. The name Ealdredesgate, late Saxon, comes about later, around 1000: it means Ealdrād's gate, maybe for the Archbishop of York of that name who crowned William I in 1066. These episcopal ties lingered. After 1660, Aldersgate Street contained the Bishop of London's chapel and chambers at London House, nearer to St Paul's Cathedral than his official residence in Fulham. In 1650, James Howell, Historiographer Royal, said the wide Aldersgate with its impressive houses 'resembleth an Italian street more than any other in London.' And Royal Arch being a kingly order, it was a bit earlier through Aldersgate that James VI of Scotland, on his way to unite the English and Scottish crowns, entered the City shortly before in 1603.

The HRA Chapter consecration meeting took place, fittingly, on Aldersgate Street, at the Castle and Falcon Inn: now vanished, but we know the hostelry stood there since 1673. Founders included George Kenning, half namesake of Toye Kenning, and John Derby Allcroft, later MP for Worcester. The Grand Scribe E, Colonel Shadwell Henry Clerke (a former army officer during the Crimean War) invested Allcroft—who also was Grand Treasurer—as Aldersgate Chapter's first First Principal. For a long time it met at the Hotel Splendide on Piccadilly. Its sponsoring Lodge, founded seven years before and which became Arts and Aldersgate Lodge after an amalgamation, has gone on to great things as the Grand Charities' Lodge.

Aldersgate Chapter duly established a Chapter of Improvement in May 1900. From the start, it was for the Royal Arch as a whole, not only for members of Aldersgate Chapter. A Companion Whitaker served as its first Preceptor during its first fourteen years. We know from 1914 until at least 1957 the Chapter of Improvement met, true to its name, on Aldersgate Street, initially at the Manchester Hotel (destroyed in the Blitz), and in 1914 moved to the Raglan Hotel (which still stands as a Greene King pub, and site of a hostelry since Shakespeare's day). Those attending paid a princely fee of one shilling for each night of attendance or seven shillings and sixpence per year.

In 1921, the Chapter of Improvement first published the Aldersgate Ritual, which they noted was as near the original working was in their power, and which would remain fixed unless Supreme Grand Chapter instructed the Committee to make changes. We know after the 1817 union of the Ancients and Modern Grand Chapters, the Supreme Grand Chapter turned its mind to introducing a uniform working. A Chapter of Promulgation duly formed in 1835 for six months only, to work as a Chapter of Instruction and demonstrate the Installation and Exaltation Ceremonies from May to August and November 1835. This is the ancestor of Aldersgate Ritual, as well as Domatic, Standard, and several other workings.

In 1922, the Chapter of Improvement began giving a presentation copy of the Aldersgate Ritual to Companions who had "passed the letter perfect test", stamped in gold lettering and supplied to the Chapter of Improvement free of cost by the publishers, A. Lewis. Companion Lear performed the feat in all offices in November and December 1922, and duly received his presentation copy on 21 December. Quickly the Chapter of Improvement grew and remained popular: by March 1928, 120 gathered for a festival and dinner at Freemasons' Hall. On both 22nd and 29th June 1944, minutes record that ceremonies were carried out "excellently" despite enemy air raids. In 1947, a Companion H J Crawford completed his record of perfect ceremonies, following that of his father in 1933. (A Companion E Crease in 1951 completed a second father-and-son feat, following his father in 1937.) It continues to flourish, and now meets every Thursday from September to May at Freemasons' Hall.

Though it boasts a long and proud history, Aldersgate Chapter's membership dwindled and aged, with only low single digits in recent years able to make meetings. In the past year, a marriage was arranged with Tivoli Libris Lodge No 2150—London's book group Lodge, itself a 2015 rescue and a young, thriving unit which sponsors London literacy charities and holds guest nights, where port and readings emerge together at the table after its clubland dinners. A book group Lodge, and a Chapter which gives its name to a ritual book.

Tivoli Libris' members agreed to rescue the Chapter, and keep such an important unit alive for the Royal Arch. At the start of the next chapter, eleven members of the rescue party duly joined on 8th August, with Tivoli Libris's Secretary Pádraig Belton taking the First Principal's chair, and its WM Brendan Quinn and DC Lt Col Michael Caseman-Jones as Second and Third Principals. The Consecrating First Principal, Colonel Clerke, himself was exalted into the Royal Arch in Ireland, in Leinster Chapter No 387 in 1858, so the rescue Principals keep alive both the Chapter's Irish and military antecedents. Aldersgate Chapter's Companions marked the happy occasion by proposing £500 to the Metropolitan appeal for two super high-rise rescue aerial platforms for London’s Fire Brigade. They also heard notices of proposition for the next two joining members, and first two exaltees, Aldersgate Chapter's first in many years.