The Challenge of the New Season

The following is a personal message from the Most Excellent Grand Superintendent, EComp Wayne Williams at the start of the new Masonic season. 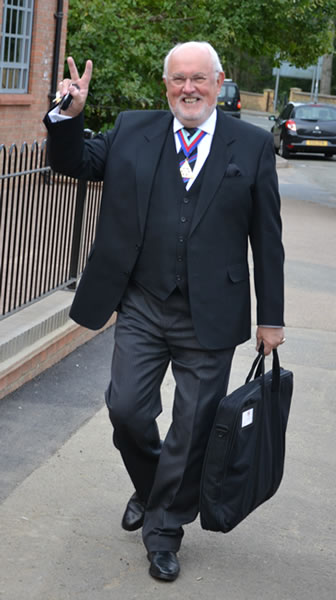 The new season 2014/2015 is with us and Province is already up and running again. From the Royal Arch perspective, Companions, it is important that we now embrace the new season with renewed vigour and enthusiasm, with batteries fully re-charged after a well-earned summer break.

Now well into the autumn months, we can only afford a brief glance back on the success of 2013 after the hugely successful fund raising Appeal which marked our Bicentenary. But as I have already stated, year 2013 has long since passed; it is time to draw a line under it as those happy memories gradually fade into the mists of time. It is time therefore to refocus once more on “the day job”  -  raising the profile of the Royal Arch to even greater heights and attracting good Master Masons for exaltation into worthy Royal Arch Companions.

Each and every one of us has to be seen as an ambassador for the Royal Arch; there’s no room for complacency just sitting on the sidelines in the mistaken belief that one has already made his contribution. Far from it; the responsibility for raising the profile and reputation of the Royal Arch is down to us all - to enlighten those of our Craft colleagues whose journey through Pure Antient Masonry remains incomplete until they have engaged that fourth stage - the Supreme Degree - as so clearly defined in the Preliminary Declaration of 1813, found on Page 1 of their Book of Constitutions.

That Declaration reminds us that we were all initiated into Pure Antient Masonry from the very outset – a journey of enlightenment and discovery through three stages of Craft Masonry to include the spiritual reawakening as revealed in the Supreme Order of the Holy Royal Arch. Check it out for yourself - we have all embarked on a fascinating journey from “Initiation to Exaltation” and that is precisely the commitment we made from the very beginning.

We should make so much more of this at the very time a potential candidate for initiation is introduced to the Brethren of his Lodge at interview. It is at that point that he should be made aware that he is expected to progress initially through the Three Degrees of Craft, then to spend some time contemplating on the lessons he has been taught before preparing himself for the fourth and final stage. By that time, with proper coaching and mentoring, he will appreciate that there surely has to be something else to follow. The Masonic legend cannot be allowed to end in anguish, grief and death as it does – just reflect on the ending of your own Third Degree. The Ceremony of Raising gives a number of hints and clues throughout that there might well be a happier finale to come but in the heat of the moment as the ceremony progresses, those hints simply do not register; we miss them.

But I do have to confess that, in years past, we have been pretty poor in promoting the Royal Arch, explaining its true purpose and providing suitable explanatory literature in language that we can all understand. We hardly ever lifted the profile of the Order above being just seen as a boring addition to the Three Degrees of Craft. As a PR exercise, we failed abysmally. We let ourselves down badly and we, and our predecessors, allowed it to happen. Companions, never again.

But now – happy days - we promote a much lighter approach, avoiding much of the deep religious and philosophical debates which still have a small part to play but now focussing more on the relevancy of the Order within a framework of Pure Antient Masonry, clearly defining its true purpose and thereby enhancing its appeal for today’s modern Mason.

To this end, we are currently considering ways of improving our presentation of Royal Arch Masonry in this Province – how best to enhance its image in particular on the internet, in communications generally to all Companions and the methods by which we collect and report newsworthy events, all with the prime objective of briefing Companions and appealing to those potential candidates who might be quietly encouraged by what they see. This will become clearer as the masonic year 2014/2015 progresses.

If only communication had been that well intended all those years ago. For many of us, it took far too long to appreciate the true meaning of the Royal Arch and its true purpose.  It was all too confusing and its relevancy seemed rather questionable but eventually, after sitting on the sidelines in blissful ignorance, it was a relief to discover that so many of us had shared that same doubt and uncertainty, unaware of the spiritual reawakening that the Supreme Degree was inviting us to contemplate.

In more recent years therefore we have tried to ensure that no longer will our younger and newly exalted Companions have to sit there in a similar state of confusion. We all deserve a better understanding of Pure Antient Masonry from the earliest opportunity and the need for better clarity, particularly as it relates to the role that the Holy Royal Arch will play in one’s Masonic progression. After all, the Craft is an analogy of a journey through life, focussing on one’s worldly attributes – the Royal Arch in turn invites quiet reflection on what might lie beyond, a spiritual awareness and well-being with one’s God, one’s Supreme Being in whatever form that Supreme Being presents himself to you.

We know that we will always have a small number of Brethren who find it difficult to recognise the Royal Arch, let alone contemplate any possibility of exaltation. We know who they are!  This is the cross we carry after those earlier years of appalling PR and lack of profile. Be it stubbornness on their part and a determined resistance not to conform, we won’t change them now; just admire their resilience! Thankfully, their numbers get smaller - and so did the dinosaurs. So be it.

But we, Companions, have a much larger and receptive market to address this year and well beyond 2014/2015. Our penetration into Craft membership has consistently hovered around 38%/39% over recent years – it’s not outstanding by any stretch of the imagination but about average for many a Province under Supreme Grand Chapter. It clearly indicates however that we have many still hovering on the sidelines who will now have a better appreciation of what the Holy Royal Arch has to offer. They are our target market; it will take time to penetrate but it is our joint and collective responsibility – you and me – to remind them that the Royal Arch awaits, that there is a fourth and final phase to Pure Antient Masonry and a finale which will bring a happier ending to the tragedy of their Third Degree. Their Masonic knowledge of Pure Antient Masonry will then be well and truly complete and should they still fail to see it, then are they not missing out and doing themselves such a great disservice?

But once they are exalted, Companions, then it will be our challenge to ensure that they enjoy the experience; that they are made comfortable and most welcome and, in due course, would seek to participate in our proceedings as they continue to discover that companionship which truly is the Holy Royal Arch. Let’s face the challenge together head-on; let’s have another good year. Bring it on.