The Story Behind The Jewel Of Chapter Of St James, No 2

The Story Behind The Jewel Of Chapter Of St James, No 2...

The Chapter Jewel worn by the Companions of the Chapter of St James, No 2 is surmounted by a Royal Ducal Coronet, making it unique in the Royal Arch. The warrant for the Chapter was issued at a meeting of Grand and Royal Chapter held on 6 June 1788, AL 5992.  It was consecrated one week later on 13 June, and bore the number 60.  For many years it was known as St James’s Chapter, but has now reverted to its proper title.

The union of the premier Grand Chapter with the ‘Antients’ so –called Grand Chapter occurred in 1817.  One of its regulations was that every regular Chapter should be attached to a regular Craft Lodge and take its number.  St James Chapter found common interest with and attached itself to the Lodge of Antiquity, now No2 in the United Grand Lodge, and therefore the Chapter assumed the number 2. The story of the Jewel starts in the Lodge of Antiquity, one of the three surviving Time Immemorial Lodges, No 1 in the original Grand Lodge.

In January 1812 the Duke of Sussex, Right Worshipful Master of the Lodge from 1809 to 1843, instituted “a mark of distinction for Master Masons raised in the Lodge of Antiquity, or for such as, having become subscribing Members, shall have proved themselves well skilled in the three Degrees of the Order”.  This is not referred to in the minutes of the Lodge, but in those of the Permanent Committee meeting held on 17 January 1812.  The Jewel is known as the Royal Medal, and bears the Royal Ducal Coronet above it.  It is believed that the Duke awarded it to those members who gained his approval. The Duke was an occasional visitor to the Chapter of St James, and must have held it in high regard, as the Chapter felt able to petition His Royal Highness for a similar honour to be instituted for the Chapter.

At the convocation held on 5 March 1835 the Grand Scribe R, Comp. Wm. H. White produced and read in open Chapter the address to HRH the Grand Z:   A grant or Licence from His Royal Highness The Duke of Sussex, MEGZ, to the actual subscribing members of the Chapter of St James to surmount the Jewel of the Order with a Ducal Coronet corresponding with that which surmounts the Jewel of the Members of the Lodge of Antiquity.

TO HIS ROYAL HIGHNESS, PRINCE AUGUSTUS FREDERICK, DUKE OF SUSSEX, KG & c.  MOST EXCELLENT AND SUPREME GRAND ZERUBBABEL OF THE GRAND AND ROYAL ARCH OF JERUSALEM.

We, the Principals, Past Principals, Officers and Companions of the St. James’s Royal Arch Chapter, No.2 duly congregated and assembled in Chapter, desire to present to your Royal Highness the tribute of our veneration and grateful esteem.

And more especially on the present occasion do we desire most respectfully to offer our acknowledgements for the token for the token of your Royal Hss. kind and marked regard by which you have been most graciously pleased to distinguish the Subscribing Members of the St. James’s Chapter in permitting them under your Royal Highness’s Warrant and Sign Manual (conveyed to us through the medium of the Grand Scribe Ezra) to wear the Royal Ducal Crown surmounting that usual Jewel of the Order, as well as to indicate thereby the connection of the Chapter with the Lodge off Antiquity.

We know, Most Excellent Prince, that all Masons, as such are dear to your Royal Hss. heart, but that your affections dwell more with those who, from private regard or from the circumstances of Association in the same Lodge or Chapter, enjoy your Royal Highness’s condescending note and approbation as is now clearly manifested towards us, your Royal Highness’s grateful and faithful Brethren, Companions and Servants.

The response to this address was then read.

Most Excellent Companions, - I have received with great satisfaction the Address which you Most Excellent Z. presented to me in your name.  Every Testimony of attachment from any body in our Society must be satisfactory to me, and the more respectably it is composed, the greater is the value I put upon the communication.

To have given you therefore a proof of my goodwill, and to show that you are deserving of the Compliment, and that you feel the same is most consonant to my feelings.  That you may continue in your exertions for the benefit of the Order, and that your exertions may prosper under the protection of the Great Disposer of all Human Events, is my most ardent and fervent prayer on behalf of the Society at large, as well as for the welfare of your Royal Chapter in particular. 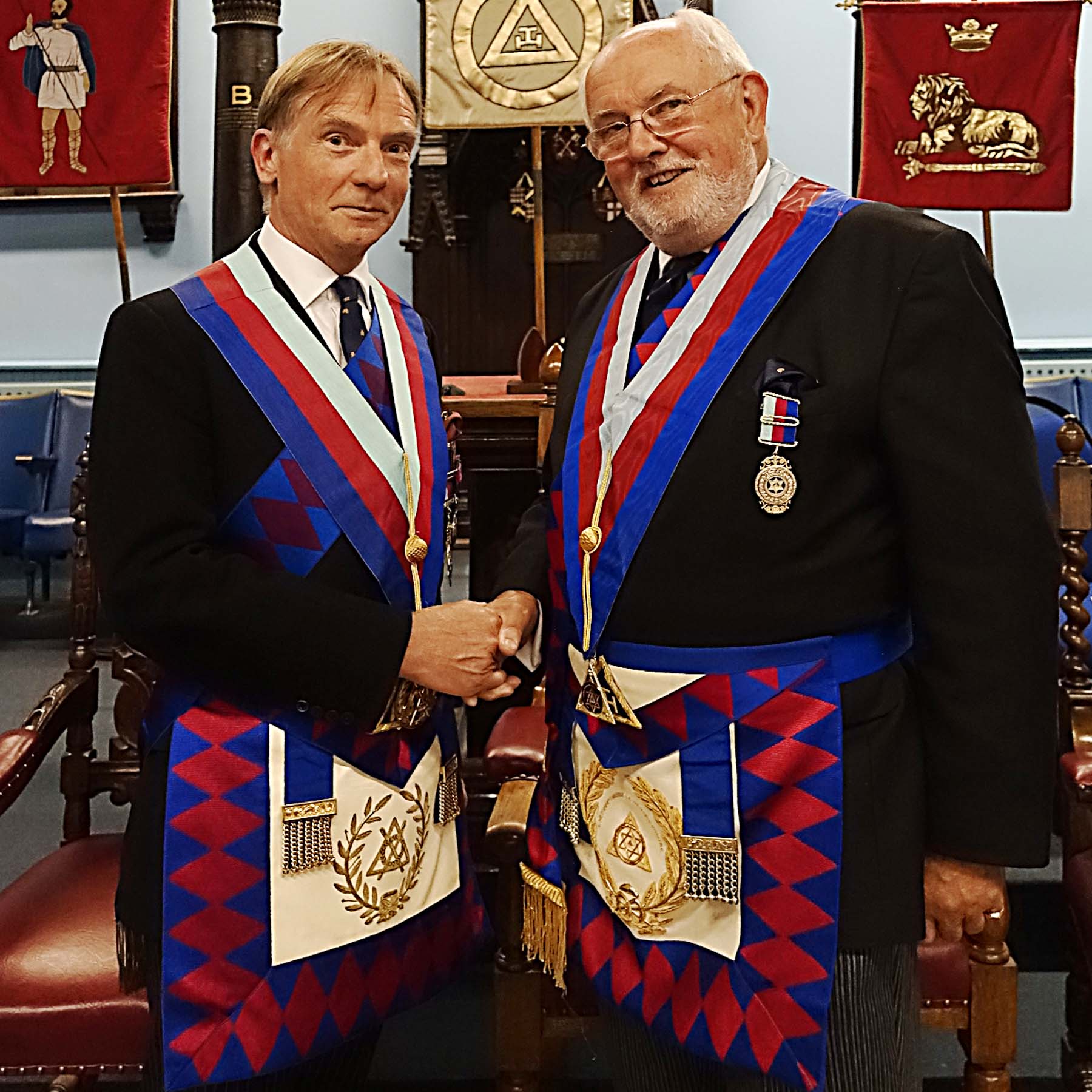 Dickon Sandbach, PZ of the Chapter of St James, No 2.