On Saturday the 6th of June 2019, local Masons had the pleasure of welcoming a group of Cheshire Masons to the Province.

Led by their Assistant Provincial Grand Master, WBro Gary Horstman, the group were cycling along canal towpaths from Cheshire to Freemasons Hall in Great Queen Street, London in a laudable effort to raise funds for their Provincial Charity.

Day three of the five-day journey proved to be quite eventful for the intrepid group of 16 cyclists and two supporters when one of their number fell into the canal! Thankfully the cyclist wasn't seriously hurt.

The Northamptonshire and Huntingdonshire Deputy Provincial Grand Master, VWBro Charles Bennett, caught up with the group during their overnight stay in Daventry and presented WBro Gary Horstman with a donation from the Provincial Grand Charity.  WBro Horstman returned the favour by giving VWBro Bennett a donation towards the Province's 2024 Festival. 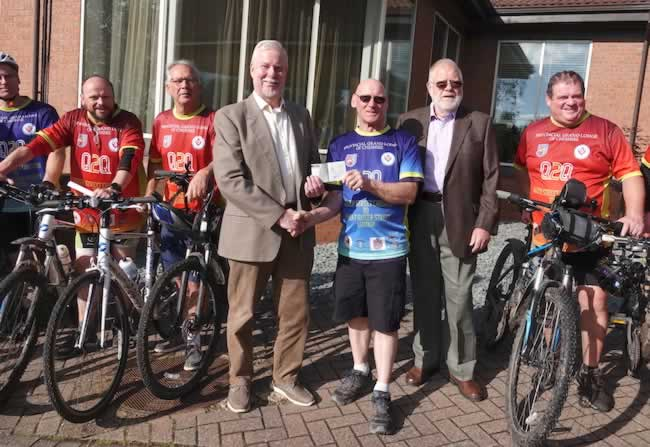