Installation of the PGM as Master of Towcestrian Lodge

The meeting of the Towcestrian Lodge No. 9510 held at Towcester Masonic Hall on Wednesday the 25th of September 2019 was special not only because it was the Lodge's 150th meeting, but also because it saw the Installation of the Provincial Grand Master, RWBro Max Bayes, as Master of the Lodge.

The occasion marked the eighth time the PGM had been installed into the Chair of King Solomon, the others being Northants & Hunts Lodge of Installed Masters No. 3422, John Pyel Lodge No. 5195, Lodge of St James No. 6838, Palmer Lodge of Provincial Grand Stewards No. 8995, Three Counties Lodge No, 9278, Wilavestone Lodge No. 9829, and Salcey Forest Lodge No. 9854

Over 100-brethren were in attendance, including a significant number of Grand Officers, active Provincial Officers, and members of the PGM's other lodges. Three rows of chairs had to be provided, which rarely happens! 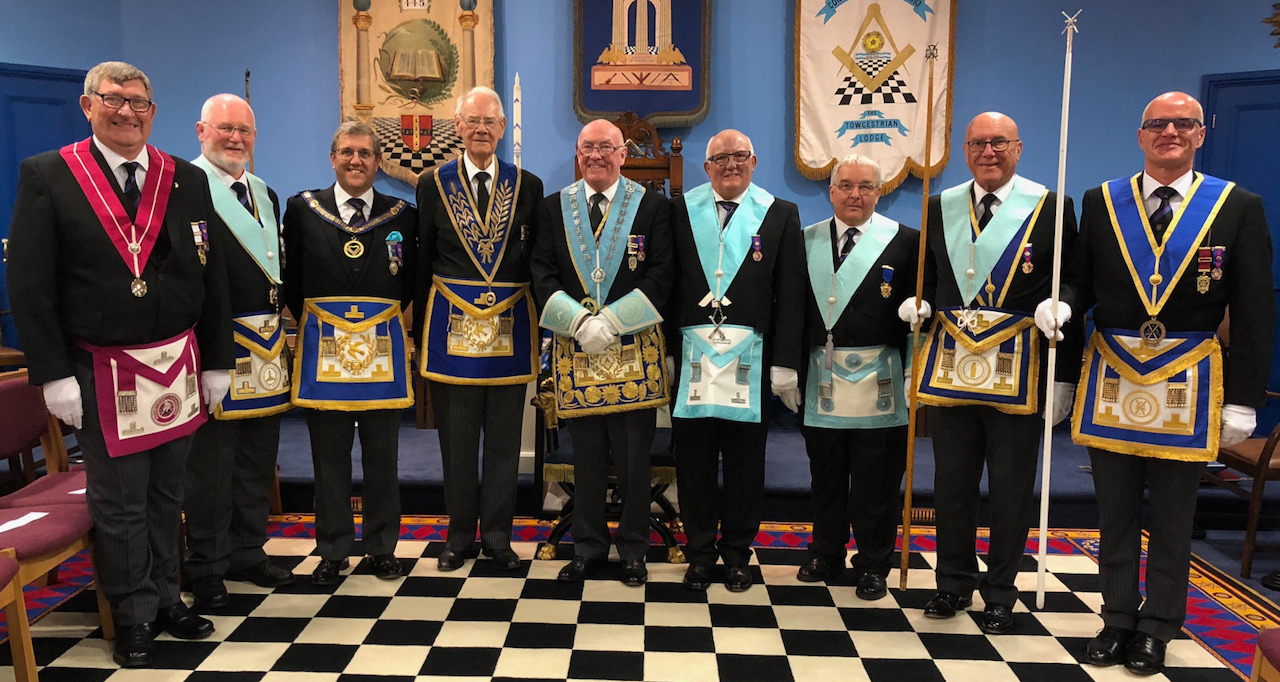 The ritual in the lodge room was superb.

The outgoing Master, WBro Mike Scott, did a fantastic job of installing the PGM, who in turn invested his officers in his usual exemplary manner.

Other notable contributions were as follows:

Upon investing the Immediate Past Master, WBro Mike Scott, as Lodge Mentor, the PGM told him that he'd had a very good year as Master, and that he had no doubt he was the right man to fill this very important role.

The PGM's investiture of WBro Andy Lowe as the Lodge's Assistant Director of Ceremonies was also a significant moment. When the Towcestrian Lodge was consecrated in 1993, the PGM was one of its founder members and its first ADC; the jewel he presented to WBro Lowe still bore his name on the reverse.

Notwithstanding that Towcestrian Lodge usually dines at The Saracens Head Hotel following its meetings, the number of brethren in attendance required the festive board to take place at Towcestrians Sports Club.

Following a meal enjoyed by all, WBro Andrew Woodward gave an excellent rendition of the Master's Song.

In replying to his toast as Master, which was excellently given by WBro Graham Minett, the PGM gave special thanks to WBro Kevin Eastwood ProvJGD, the Lodge's Charity Steward, who had stood aside to allow the PGM to take the Master's Chair, the PGM not being able to undertake a number of the other lodge offices due to his Provincial duties.

The PGM also commented how pleased he was to see present all but one of the lodge founders. Unfortunately, WBro Merryn Robinson was unable to attend due to ill health.

Finally, the PGM gave grateful thanks to all those who attended the meeting to support him, particularly the brethren from his other lodges and his good friend, WBro Michael Herbert PSGD, who had postponed his holiday so that he could be there.

We are most grateful for the PGM’s tireless leadership and dedication to the Craft in general and the Province of Northamptonshire and Huntingdonshire in particular.

We wish him a very happy, enjoyable and productive year as Master of the Towcestrian Lodge.