In a video-message addressed to the Province, the Provincial Grand Master, RWBro Max Bayes, explained that Wednesday the 29th of April 2020, the day previously scheduled for the Annual Grand Lodge Investiture meeting, was to have been a very special day for him, the Province, the brethren who were to have received Grand Rank first-appointments and promotions, and their personal guests.

He had expected to welcome around 30-brethren from the Province, following which they would have had an enjoyable lunch before attending the meeting, which always proved to be a very special occasion

Sadly, none of this could take place due to the restrictions put in place as a result of the COVID-19 pandemic.

The Provincial Grand Master did, however, confirm that the Grand Rank appointments were to take immediate effect, and that the brethren concerned are entitled to wear their new regalia when meetings resume.

As is the usual custom, a photograph and résumé of each Grand Rank first-appointee follows together with brief details of re-appointments and promotions.

In the case of some newly appointed brethren, it has not been possible to obtain photographs of them in their new regalia due to the COVID-19 pandemic. This will be corrected as soon as circumstances allow.

We reiterate our congratulations to all of the following brethren on their preferment.

First Appointment to Past Assistant Grand Director of Ceremonies (PAGDC) 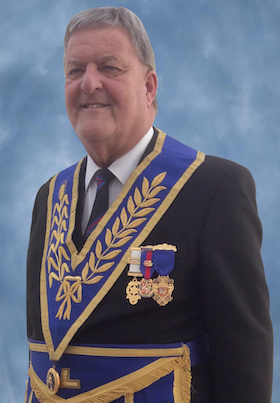 WBro Bob was born in Stamford and educated in Market Deeping. At the age of 19, he joined the Police at Old Fletton whereupon he spent 2½ years as a beat officer in Peterborough before joining the Criminal Investigation Department (CID), more specifically, scenes-of-crime investigation.

Bob served as a police officer for 30-years, eventually becoming the senior scenes-of-crime officer specialising in major crime and cold-case investigations. Upon retirement, he was re-employed as a civilian scientific-support officer, a role he performed for 10-years.

Bob was initiated into Peterborough and Counties Lodge No. 2996 in 1990 before becoming a founder member of Richard Sandbach Lodge of Research No. 9600 in 1995 and a member of Palmer Lodge of Provincial Grand Stewards No. 8995 in 2001.

Bob was appointed as Past Provincial Senior Grand Warden in 2014.

In 2017, he was the first person to be appointed as a Group Officer (at Peterborough) without having been appointed to Grand Rank first.

Also in 2017, Bob was invested as the Provincial Grand Master of the Northants and Hunts Mark Province. He is also the current Worshipful Master of Three Counties Lodge No. 9278 having been appointed in 2019.

Bob has been married to Marilyn for over 50-years. They have 3-daughters and 7-grandchildren, which keeps them very busy as one might imagine! 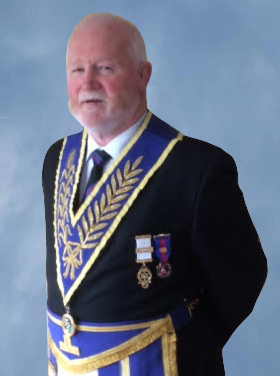 WBro Bob was born and raised in the Daventry district. He was initiated into Freemasonry in Lactodorum Lodge No. 8526 in 1994 having been proposed and seconded by colleagues working at St John’s School, Tiffield.

Bob progressed through all the offices in Lactodorum Lodge before becoming Worshipful Master in the 2006/7 season.

He became a founding member of Webb Ellis Lodge No. 9740 in 2001 where he again progressed through the various offices before becoming the Lodge's ninth Worshipful Master in the 2009/10 season.

Bob was honoured to be appointed as a Provincial Grand Steward in 2008/9, ProvAGDC in 2012/13, and ProvDepGDC from 2013 to 2017. He also served the office of active Provincial Senior Grand Warden with great distinction during the 2018/19 Masonic season.

Bob is currently Director of Ceremonies in Lactodorum Lodge and Palmer Lodge of Provincial Grand Stewards. He is also ADC in Webb Ellis Lodge and Senior Warden in Towcestrian Lodge No. 9510.

Bob has been a director of the Towcester Masonic Hall Property Company since November 2015.

As a former physical education teacher, Bob played Rugby Union at a high-level and made many appearances for Northampton Saints.

Notwithstanding that he enjoys watching any sports, Bob's burning ambition is to follow the entire Tour De France with his family and cycle down Mont Ventoux (1,909m) with his two grandsons, currently aged three and four years! 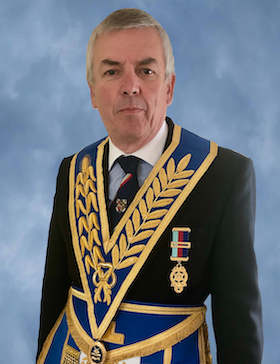 WBro Martin was born in Nuneaton, Warwickshire. He was educated at nearby Hartshill High School.

After leaving school, Martin started work as a trainee supermarket manager. By the age of 21, he was running his own supermarket in Hertfordshire.

Martin subsequently moved into non-food retailing, working for Argos and becoming Group Facilities Manager until finishing full-time work at the age of 54.

Since retiring, Martin has been employed part-time as an examination invigilator, and upon moving to Perry, Cambridgeshire, joined the staff at Kimbolton School as Assistant Examination Officer.

Martin's wide-ranging Masonic career began when he was initiated into Newdegate Lodge No. 5102 in Warwickshire in 1978. He subsequently served as the Lodge's Worshipful Master in 1990/1.

Martin went on to become a founder member of Veritas Lodge No. 9108 in Bedfordshire in 1984. He became Worshipful Master in 1993/4 and is now the Lodge's secretary.

Martin was appointed as Provincial Grand Charity Steward in Bedfordshire in 2017, an office he continues to hold.

He is a member of no less than five other lodges of which he has been Worshipful Master in three including Old Kimboltonians' Lodge No. 7204 in 2018.

Martin is also a member of Three Counties Lodge No. 9278.

He is the District Grand Master of the East Midlands District of Royal and Select Masters, and holds office in several other orders.

Martin is married with three children and four grandchildren. He enjoys caravanning and DIY, and admits to playing golf - badly! 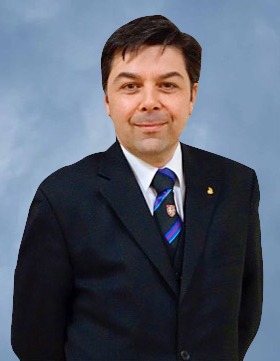 WBro John was born in London in May 1972 to Scottish parents, which became a major influence on his decision to join Anglo Scottish Lodge No. 8844.

He subsequently completed a degree in International Marketing, which saw him spend time in Paris. Accordingly, John is able to speak French relatively fluently.

He now works as an executive search consultant within the technology industry.

Freemasonry has been a part of John's family in Scotland; he has cousins and uncles who are involved in the Craft in Edinburgh.

WBro John approached the Provincial Office when the Internet was in its infancy and expressed his interest in joining Freemasonry to the then Provincial Grand Secretary, WBro Norman Pope.

Consequently, John was initiated into Anglo Scottish Lodge in March 2006 and progressed through the offices to become its Worshipful Master in September 2012.

John continues to serve Anglo Scottish as its Secretary, and in March 2011, he completed his journey in Pure Antient Freemasonry by being exalted into Eleanor Cross Chapter, subsequently becoming First Principal in March 2017.

John is also Assistant Secretary of Palmer Lodge of Provincial Grand Stewards and a member of Northants & Hunts Lodge of Installed Masters.

In 2016, the Provincial Grand Master invited John to become the first Provincial Membership Officer, a role which he thoroughly enjoys. John also sits on the Provincial Communications Committee and is responsible for social-media engagement.

Outside of Freemasonry, John is married to Yvette and has two children, Megan and Cameron, who are 14-years and 12-years old respectively.

John has a passion for most sports, particularly football and rugby, albeit he admits to being more of an armchair observer!

Reappointment as Deputy President of the Masonic Charitable Foundation: