The conferment of a Provincial Grand Master’s Certificate of Merit (CoM) is always a significant event, but earlier this year, the PGM, RWBro Max Bayes, was pleased to award it to not one, but two members of the same lodge, and at consecutive meetings!

At the regular meeting of Old Northamptonian Lodge No. 5694 held in January 2020, WBro Eric Ellison was surprised to see so many of his colleagues from the Provincial Office.

The reason for their unexpected visit became clear when the PGM presented WBro Eric with his CoM in recognition of his service and commitment to the Provincial office over the preceding 12-years. 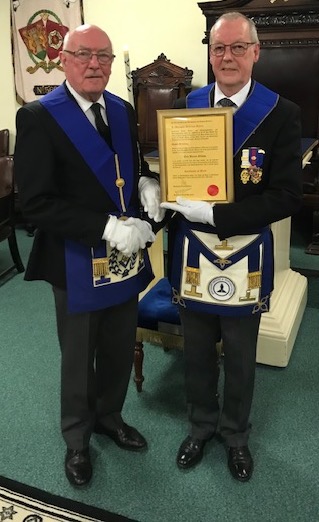 As is the custom, each CoM award was accompanied by an immediate promotion to the rank of Past Provincial Senior Grand Warden (PPSGW).

We are most grateful to WBro Norman Pope PSGD, PAsstProvGM for compiling the following words in respect of his fellow Old Northamptonian brethren.

WBro Eric Ellison PPSGW hails from Leicestershire where he was initiated and progressed to Worshipful Master in Saint James' Lodge No. 8478.

WBro Eric subsequently moved to our Province and joined Abington Lodge No. 8041 where a number of his Leicester colleagues also attended.

In 2010, both VWBro Trevor Boswell and myself got to know Eric, and he started working in the Provincial Office as Assistant Secretary.

Eric joined Old Northamptonian Lodge No. 5694 in 2012. He has filled the office of Senior Steward in exemplary form for 6-years whilst still progressing to the Chair of King Solomon via the Wardens' offices.

Eric withdrew from the position of Provincial Assistant Grand Secretary to concentrate on the production of the Province’s Masonic Year Book; also, the task of converting paper copies of each of the Province’s 94-lodge’s historic summonses into electronic form.

The latter is a mammoth task indeed, one that will ensure our Masonic history will be preserved for all to access.

Eric also developed the Year Book from an annual printed version to an online electronic version, one that he continues to update on a regular basis and is available to download from the Provincial website (click here to view - registered website users only).

Sourcing the necessary information from all Orders to maintain the Year Book is a challenge, but Eric's excellent skill-set enables him to secure this information using varying techniques, and he continues to be a key member of the Provincial Office secretariat.

From a personal perspective, Eric was employed by British Gas in various management roles. He is a keen Swindon Town football supporter, and has a permanent spot in the bar of The Yeomen of England pub in Wootton - the village where he now resides.

Eric is married to Liz and celebrated his 70th birthday in 2017. Their daughter, Kate, married her husband, Craig, in 2018.

WBro Jim Tarry PPSGW is of farming stock and has lived in Stoke Bruerne for much of his life.

WBro Jim's family were steeped in Freemasonry, so it was no surprise when he was initiated into Old Northamptonian Lodge No. 5694 in 1991.

I had the good fortune to install Jim as Master of the lodge in 1998, by which time we were all aware that Jim's life on the farm presented many challenges. Various incidents involving farm machinery resulted in Jim's knees and several shoulder-parts having to be replaced.

Having progressed through the offices of the Lodge in fine form, Jim enjoyed a good year in the Chair and soon saw the joy of filling the office of Tyler, taking responsibility for the preparation of candidates whilst putting them at ease for their ceremonies.

As a result, Jim subsequently accepted the office of Tyler in 12-lodges, 10 of which he continues to serve today.

The ability to perform this role so well resulted in Jim’s appointment to Provincial Grand Tyler in 2003, a post he held for 10-years. The role is an important one that carries the responsibility of ensuring everything is in order prior to the opening of Provincial Grand Lodge.

Jim's delivery of the Tyler's Toast continues to be a favourite of many.

Jim has also held the office of Almoner in the Old Northamptonian and Grand Junction lodges, during which time he developed special relationships with lodge members and widows alike, relationships that still blossom today.

Jim continued with much of his farming activity until recently.

In addition to managing the Stoke Bruerne Cricket Club facilities, he also has a permanent spot at The Boat Inn at Stoke Bruerne, where he celebrated his 70th Birthday in 2017.

His love of a good pint had a lot to do with his preference for being Tyler - an empty glass outside all of his tyled lodge-rooms will testify to this!

The Provincial Grand Master's Certificate of Merit is carefully gifted and reflects a Brother's above-and-beyond commitment to the Province in his Masonic activities.

WBro Eric Ellison and WBro Jim Tarry are fully deserving of the preferment they have been given by the PGM in recognition of their continued and dedicated service, and Old Northamptonian Lodge is very proud of their achievements.