On the 13th July W Bro David Redden, Charity Steward of Chicheley Lodge 607, presented a cheque on behalf of the Lodge and Provincial Grand Charity to Chairman Keith Mitchell and Secretary Jonnie Johnson from the Kettering and District Prostate Cancer Support Group.

This is the second donation in 3 years that the Prostate Support Group has received funding from the Lodge and Provincial Grand Charity, highlighting the need to combat through, research, support and guidance, such a prevalent disease in men, particularly those above 50 years of age.

The following week, W Bro Chris Gauntlett, Worshipful Master of Chicheley Lodge 607, presented another cheque to the Crusader Community Boating charity based at Blisworth on behalf of the Lodge and the Provincial Grand Charity for £1,000. The charity provides free trips on the Grand Union Canal for groups of disabled, elderly and vulnerable adults from care homes and the community at large. Combined with educational and environmental trips for local school children. 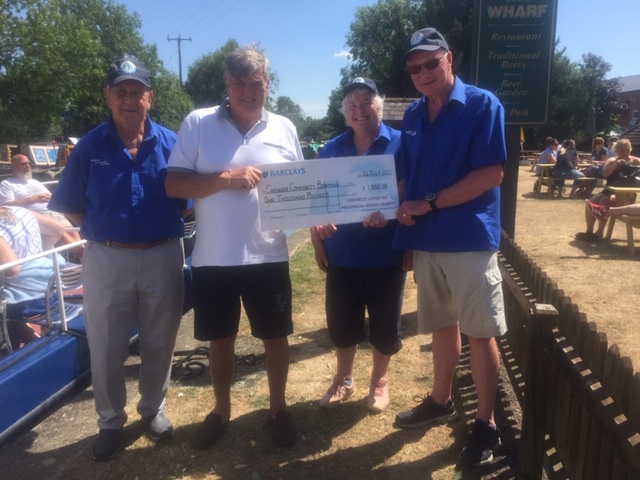 The cheque was received by volunteers; John Cheesborough, Paula Neal and Colin Neal, Chairman of Trustees, outside the lunch stop at the Wharf Inn, Bugbrooke, standing by the “Mountbatten Crusader”.

Both charities have indicated, how welcome donations are, from Lodges and in particular, the support of the Provincial Grand Charity.