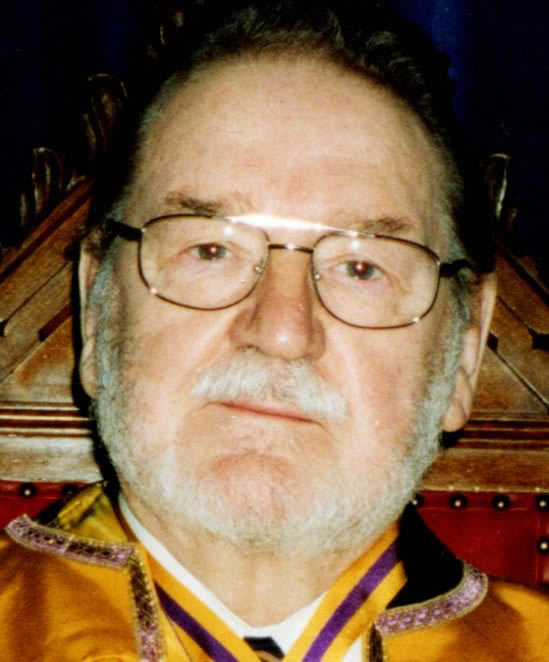 The ME Grand Superintendent, E Comp Wayne Williams, delivered a moving eulogy for the very well respected E Comp Bob Meanwell PAGSoj, CofM at Northampton Chapter recently and would like to share this edited version

E Comp Bob Meanwell passed to the Grand Chapter above on the 20th October. He was close to 89 years of age, having been born in November 1925 and initially educated at Northampton’s Bective School until leaving at the tender age of 14. He had passed the Entrance Examination for the Town’s Grammar School but father determined that he should start working immediately. E Comp Bob, rather surprisingly, started his working life as a hairdresser. On the outbreak of hostilities in 1939, he was desperate to volunteer but, again, father held Bob’s aspirations in check until achieving the age of consent, he then immediately enlisted for the Royal Air Force.

E Comp Bob commenced his training in North America to become a fighter pilot but unfortunately for him yet perhaps fortunately for us, hostilities ceased before Bob had completed his training. He returned to Northampton, still determined to qualify as a pilot and continued his training at Sywell before qualifying for his licence. By this time, he had met his future wife, Chris, who was then working at Northampton General Hospital. To impress her on a couple of occasions, Bob took it upon himself to buzz the Hospital in a borrowed Tiger Moth, much to her embarrassment and the annoyance of the local authorities. Bob and Chris were married in 1946.

E Comp Bob was determined to go further; on returning to Northampton, he continued his studies at night school, completed successfully the then equivalent to O and A levels and qualified to attend Shoreditch College, then assessed as one of the best handicraft colleges in the country. E Comp Bob was destined for a teaching career. He was subsequently offered a teaching post at the prestigious Oundle School. However, he tactfully declined as Saturday teaching commitments would have prevented his regular attendance at Franklins Gardens and his support of Northampton Saints.Instead, his teaching career took off at the Cliftonville Secondary Modern School here in Northampton.

A passion for Freemasonry soon took hold in 1970 when E Comp Bob was initiated into Dr Field Lodge No: 8158 and amongst other memberships, he became a Founder of the Lodge of Harmony No: 9048 in 1982. He was exalted into Northampton Chapter No: 360 in May 1972 and a glittering Royal Arch career was set to follow. He progressed through the Chapter Offices – Director of Ceremonies on no less than three occasions – and rising to PrGDC in 1995 and promoted in Supreme Grand Chapter to PAGSoj in 2004. He was awarded the Grand Superintendents Certificate of Meritorius Service in 2002 for his devoted commitment to the Holy Royal Arch in general and to this Province in particular. He was a senior Royal Arch Companion in every aspect and was elected to Honorary Member status of Northampton Chapter in May 2011.

Yet somehow amongst all his Masonic commitments, he was a devoted family man – his son, Bob (Junior), was born in 1948 and has since become a successful Architect. Two Granddaughters, Kathryn and Ellie, came along in 1998 and 1991 respectively and upon whom E Comp Bob and his wife, Chris, have doted.

E Comp Bob dedicated himself to being his wife Chris' permanent carer as she developed Alzheimers , yet at a time when his own health was beginning to fail. No longer could he regularly attend his Lodges and Chapters – we saw of him less and less but knew that in spirit he was still in attendance. He was a true “mentor” to so many – to his family, to his students, to his friends and to his Brethren and Companions. In Freemasonry, he was a Mentor before his time and to the many who he willingly took under his wing, they learnt so much from him.

He was a great man, a great Mason and a truly great friend. No truer words were spoken when we say he lived respected and died regretted.