New Wheels for The 3 Pillars - Feeding The Homeless Trust

On Thursday the 11th April of April 2019, the Provincial Grand Master, RWBro Max Bayes, was thrilled to attend Peterborough and present representatives of The 3 Pillars - Feeding The Homeless Trust with keys to a brand new van. 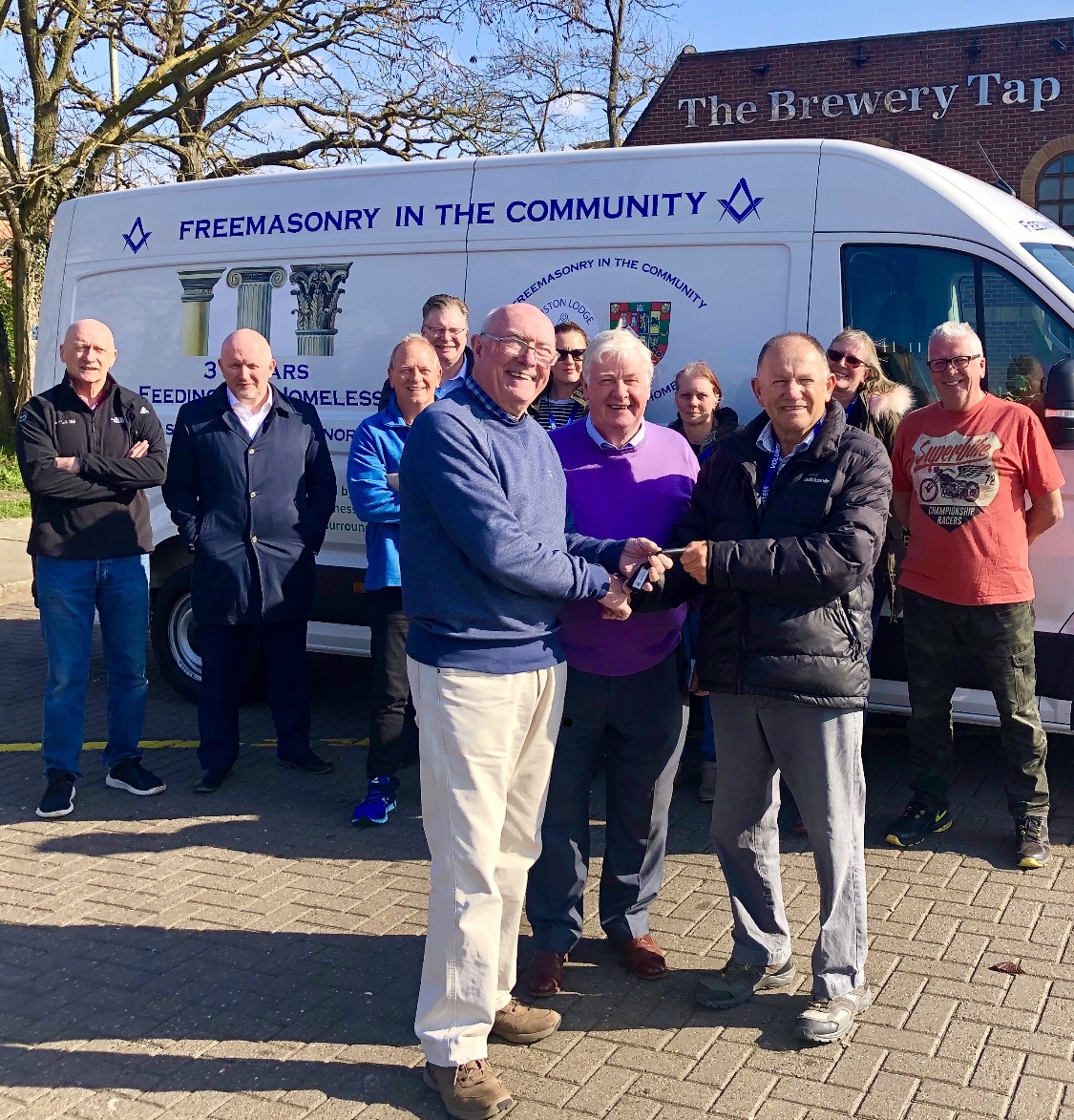 Provision of the new vehicle, which cost in excess of £30,000, will allow the Trust's original van to be redeployed in support of the homeless in the Wellingborough area.

Having presented the keys, the Provincial Grand Master was keen to see the Trust in action and stayed-on to see that evening's feeding station.

Not being one to sit on the side-lines, the PGM assisted the other 3 Pillars volunteers to give-out much needed supplies.

The Provincial Grand Master said that he considered the work done by the Trust to be vitally important. He added that it was necessary to "break the circle of dependency and find a way to offer hope to people and a possible solution to their plight." He praised the Trust for providing a "hand-up" rather than just a "hand-out".

The 3 Pillars - Feeding The Homeless Trust has served the homeless community in Peterborough since 2016. It provides regular feeding stations as well as food, clothing, tents, sleeping bags, and toiletries.

In a relatively short time, the Trust, which was originally formed by local Freemasons WBro Ged Dempsey and WBro Mick Pescod, has gone from strength-to-strength as a result of continued support from lodges across the Province as well as individuals and local businesses.

The Trust's volunteers can be found every Tuesday and Thursday operating from the car park at the rear of The Brewery Tap pub in Westgate. During this time, it's not at all unusual for them to assist between 60 to 80 people who have fallen on hard times.

The Trust is named 3 Pillars to represent the three principles on which Freemasonry is built: brotherly love, relief, and truth. In other words, respect for others, charitable giving, and being true and honest to oneself and others. The Trust prides itself on epitomising these principles.

The charity illustrates the work of Freemasons within the community, with volunteers offering either their time as helpers or by making monetary or other donations of clothing, blankets or personal commodities we may need. Some of our volunteers are not Masons but all work together for a common good and benefit to the wider public - the response and support have been overwhelming.

In support of this statement, WBro Ged cited the example of a Ladies Festival held recently at Ellindon Masonic Centre. The event's raffle raised just over £600 in support of the Trust, which is typical of the support provided by Freemasons and the wider public, support which funds the charity’s front-line services directly.

However, the work of The Trust goes much further than that on public display every Tuesday and Thursday.

By liaising closely with organisations such as the YMCA, it is able to help some of those who visit the feeding station to get off the street and back into society.

So far, the Trust has helped to find accommodation for 24-individuals including bedding, kitchen utensils, and other important supplies. It also donates £250 to the YMCA to cover a rent ‘top-up’ for each person lasting approximately 6-weeks.

This support greatly alleviates the pressures on the individuals concerned so that their reintegration into society is as stress-free as possible. This in turn gives them the best possible opportunity to start a new life.

On top of that, the Trust has also found safe housing for 6 families with children, 7 vulnerable females, and 4 victims of domestic violence.

Donations can be made via The Trust's Wonderful.org page: