The Provincial Grand Master, RWBro Max Bayes, has been pleased to confirm the appointment of WBro Rick Hill ProvAGDC as the new Local Communications Officer for the South-West group of lodges, which meet in and around Brackley, Daventry and Towcester. 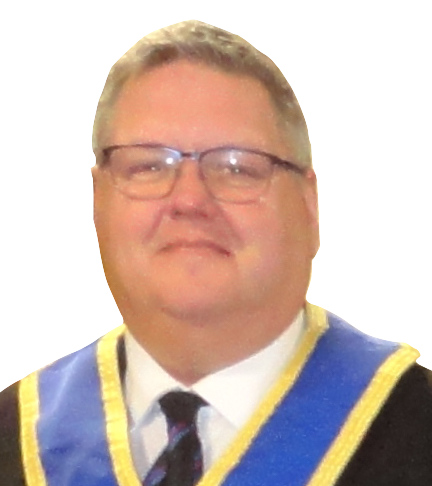 Our grateful thanks go to Rick`s predecessor, WBro Mike `Shep` Sheppard PPSGW, who has been a stalwart member of the Provincial Communications Committee for over 8-years making a significant contribution throughout.

Rick originally hails from Bolton, Lancashire and has been married to Victoria for over 26-years. They have three children, two of whom have since flown the nest.

The couple have lived in Daventry for 18-years having moved there from Surrey.

Prior to that, Rick and Victoria lived in Devon. They also spent a few years in South Africa, where their two eldest children were born.

Rick's Masonic career began in February 1991 when he was initiated into Boltonian Lodge No. 3716 in the Province of East Lancs.

Rick is also Director of Ceremonies of Lodge of the Oldest Ally No. 9524, a Past Master of Heartland Lodge No. 8990 (Warwickshire), and a member of Northants & Hunts Lodge of Installed Masters No. 3422 and Palmer Lodge of Provincial Grand Stewards No. 8995. He is also a preceptor of the Daventry Lodge of Instruction.

Rick received his first Provincial appointment in 2015 when he was made Provincial Grand Steward. He received a further promotion in 2019 when he was appointed as Provincial Assistant Grand Director of Ceremonies.

In addition to being a very busy Craft Mason, Rick is an active member of Holy Royal Arch having been exalted into Baildon Chapter No. 1545 in January 1994. He joined Beneventa Chapter in Daventry in 2008 becoming MEZ in 2016.

Rick is also an active member of several other Masonic orders.

Outside of Freemasonry, Rick is keen on rugby although he regrets that his playing days are long past. He does, however, continue to enjoy fishing and shooting.

We wish Rick very success in his new role and have no doubt that he will do an excellent job.