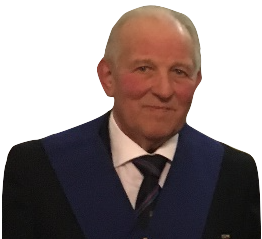 In addition to becoming Master of the Lodge in 1999 and 2005, he has also served the offices of Secretary, Director of Ceremonies, and Preceptor.

Francis is a Past Master of Meridian Lodge No. 9542 and Northants & Hunts Installed Masters No. 3422.

He is also a member of Sothius Lodge No. 8774 and Palmer Lodge of Provincial Grand Stewards No. 8995. Also, the consecrating Senior Warden and an honorary member of Salcey Forest Lodge No. 9854.

Francis was appointed as active Provincial Senior Grand Warden in 2009. He received Grand Rank in 2012 at which time he was made Past Assistant Grand Director of Ceremonies.

Francis was exalted into St Ivo Chapter No. 2684 in 1989, subsequently becoming First Principal in 2006. He also served as Scribe E.

Francis received Supreme Grand Chapter Rank in 2019 when he was appointed PGStB.

Upon being appointed, WBro Margôt said that he was looking forward to working alongside his fellow Huntingdon group officers to promote the continued good harmony and high standards enjoyed by him and the other Huntingdon brethren.