Bro Ashley Burton from Grey Friars Lodge No. 4990 works as a police officer in London.

Last December, he and a colleague attended a call to a distressed woman who appeared ready to jump from a bridge.

After approaching the woman, Bro Ashley and his colleague managed to take hold of her and pull her back to safety. They were able to build a rapport with the woman, who was taken to hospital to receive the care she needed.

The BCU (Basic Command Unit) Commander's Commendation cited "the outstanding bravery of the officers who selflessly risked their own lives to save hers". 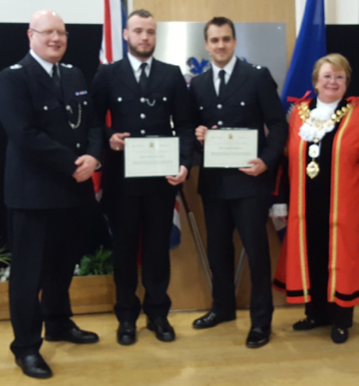 The commendation went on to say that the quick and heroic actions of Ashley and his colleague "undoubtedly saved the life of this young woman who appeared intent on committing suicide."

This was a well-deserved recognition for actions that saved a life, and it is no surprise that the Brethren of Grey Friars Lodge are proud to call Ashley their brother.

We thank Ashley and his colleagues for their continued hard work and dedication in keeping us all safe, often in very dangerous and difficult circumstances.