At the Installation meeting of Old Kimboltonians' Lodge No. 7204 held on Friday the 15th of October 2021, WBro John Mayes was delighted to receive a Golden Jubilee certificate marking his 50-years in Freemasonry. The certificate was presented by the Provincial Grand Master, RWBro Max Bayes. 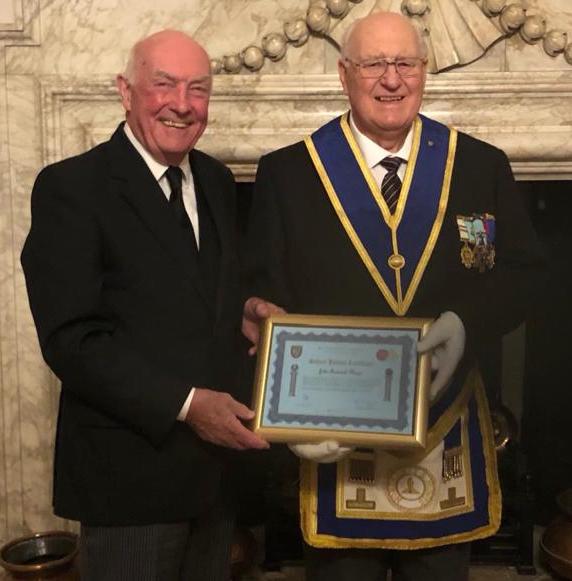 WBro John was born in Kimbolton and attended the school as a day pupil. For many years in his later life, John ran a greengrocer business that had been founded in the town by his father. He also served on the Parish Council.

After being initiated into Old Kimboltonians' Lodge No. 7204 on the 15th of October 1971, John rose through the lodge-offices to become Master in 1985.

In 1974, John joined Chicheley Lodge No. 607 at Thrapston where he became Master for a second time in 1988. Having served as Chicheley’s Assistant Secretary from 1994 to 1997 and in several offices after that, John was installed into the Chair of King Solomon for a third time in 2005.

John’s outstanding contributions to Freemasonry were further recognised in 2007 when he received the Right Worshipful Provincial Grand Master’s Certificate of Merit.

A member of Palmer Lodge of Provincial Grand Stewards No. 8995 since 1991, Companion John was also exalted into Chicheley Chapter No. 607 in 1987.

As Junior Deacon, John continues to work hard on the floor of Old Kimboltonians' Lodge. He played a significant role in the initiation of Bro Peter Wright at the October meeting and is set to do the same at another initiation planned for December. John is clearly not a man to rest on his laurels!

Highlighting John’s stalwart service to Freemasonry for over 50-years in the east of the Province, the Provincial Grand Master spoke of his magnificent service as Old Kimboltonians' Lodge treasurer for 25-years from 1988 to 2013 as well as his continuous service and outstanding contributions throughout his many other Masonic activities.

We congratulate John on reaching this significant milestone and look forward to him receiving his Platinum Jubilee certificate in another 10-years' time!